EU Commissioner: cybersecurity threats are a major concern for Europe 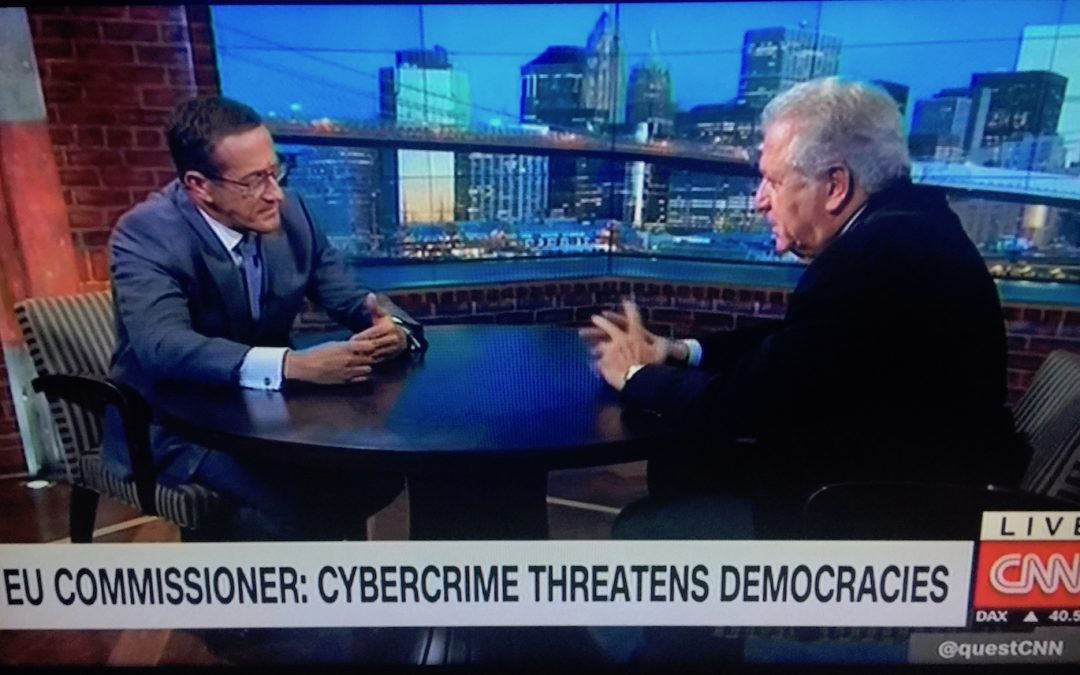 During the UN General Assembly week in NYC, the EU Home Affairs Commissioner Dimitris Avramopoulos commented with CNN’s Richard Quest on Quest Means Business, that cybersecurity threats are a major concern for Europe.

Indeed, this year alone there were already several major cyberattacks in Europe and globally, that not only affected corporations, SMEs, and governmental institutions, but also critical infrastructures such as airports, banks, the energy and medical industries. End users were and still are affected both indirectly and directly.

To name a few, the Petya cyber-attack (June 2017), affected institutions and companies in Ukraine, the Netherlands, Norway, Spain, Denmark, France. The “WannaCry” Ransomware attack (May 2017) affected several hospitals in the UK, and quickly spread to 74 countries. A few days ago, the attack on Equifax exposed the confidential financial information of over 143 million people – something similar could happen closer to home in Europe. The magnitude of the breach is unprecedented, but unfortunately this is becoming the new normal, and we can only expect attacks every time more sophisticated and massive.

Is this alarming? Yes. Can we do something about it? Sure we can.

In the cyberspace just as in life, 100% protection and security do NOT exist (and you should not believe anyone who would pretend to offer it), yet the damage caused by these recent cyberattacks could have been either minimized or in certain cases avoided completely if only these institutions had prepared and protected themselves better. There is no magic bullet, but both at the individual and at the organizational levels, there is a conjunction of measures that could and should be taken preventively.

As a cybersecurity and privacy company, our vision is of a world where our digital life is more secure and private. In fact, the primary mission of Syneidis’ team is to help European institutions, companies and citizens protect themselves from cyber-attacks, wherever they come from, and specifically to help protect their confidential data both at rest and in-transit, by providing privacy apps and cybersecurity tools that are easy-to-use, solving the proverbial conundrum between security and usability.

Simply put, our mission is to empower users to protect and manage their digital assets.

We give them back control over their data, providing a privacy and security layer which is for the most part transparent to them.

Why do we help?

Users, whether individuals or organizations, deserve to have full control over their data; independently of where the data is created, consumed or managed from: whether on mobile, computer or cloud.

We believe that privacy and protection of one’s digital lives are basic rights of any human being and of any organization.

In addition, the new EU GDPR makes encryption an obligation for any company storing users’ data.

Our privacy is everyday more exposed, partly due to a massive societal and behavioral shift to cloud services (for collaboration and storage) and online services (communication tools and social networks) that store an enormous amount of information, files and data created by us and about us.

These trends, combined with the accelerating increases in cyber threats, make it the perfect moment to fight this perfect storm.

Cybersecurity to preserve our model of society

This battle against the perfect storm is well worth fighting for, since it is our very model of society that is at risk.

Indeed, cyber warfare has become a powerful tool used by nations to attack and destabilize each other. Cyber attacks can threaten a nation’s economy, by stealing invaluable Intellectual Property, Personal Data and Strategic Data. Companies that are attacked suffer from foreign competitors stealing their trade secrets or their commercial information (ex: the content of a competitor’s bid for a large potential contract); consequently, rogue players manage to outbid and outperform companies that play by the books.

This creates loss of competitiveness for our companies, both SMEs and large corporates, which in turns impact jobs (both by direct job losses and reduction in future jobs creation). Less revenues at company and individual levels mean less tax income for a nation, and thus less ability to provide the basic rights that we in Europe have been lucky for decades to grow accustomed to enjoy as a natural thing to have: social benefits such as health protection, and a balance society with freedom of speech. In the words of the EU Commissioner, Cybercrime threatens our democracies.

After almost 20 years abroad in countries as interesting and as diverse as the USA, China, Russia, and Brazil, I decided to come back to Europe a few years ago and to start Syneidis. With all its challenges, Europe is a beautiful place to be. Despite the differences in the cultural mindsets and ways of life between a German, a French, an Italian and a Swede, we all cherish common, fundamental values. These values are broadly shared by many around the world, albeit not always available to all globally.

I am proud of the international team who has decided to join me in fulfilling our mission in Europe and beyond. We’re here to help you. Feel free to get in touch with us.